How can digital making take place at the intersection of science, math, and computational thinking?

We start with a look at Venn diagrams, to provide insight into the similarity of the logic involved in each of the following components:

A Venn diagram shows relationships among sets. For example, here are some shapes that belong to the set “quadrilaterals” (i.e., four-sided shapes):

And here are some shapes that belong to the set “regular polygons” (i.e., shapes with equal sides and equal angles):

Which shapes belong to the set of “regular quadrilaterals”? We can represent this visually with a Venn diagram: 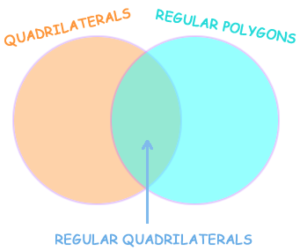 In 1971, the singer-songwriter John Denver released the song “Sunshine on my Shoulders”.

The first line of this song is:   “Sunshine on my shoulders makes me happy…”

We can represent this as:   sunshine AND shoulders = happy

And as a Venn diagram: 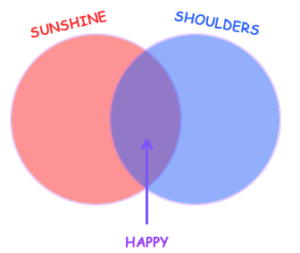 Make Your Own Venn Diagram

Use your imagination to create your own Venn diagram relationship: 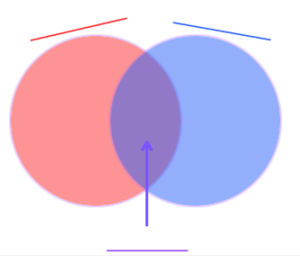 Let’s build the Venn diagram below with a circuit:

First, fold a piece of cardstock in half (width-wise) and draw the following on the top side. 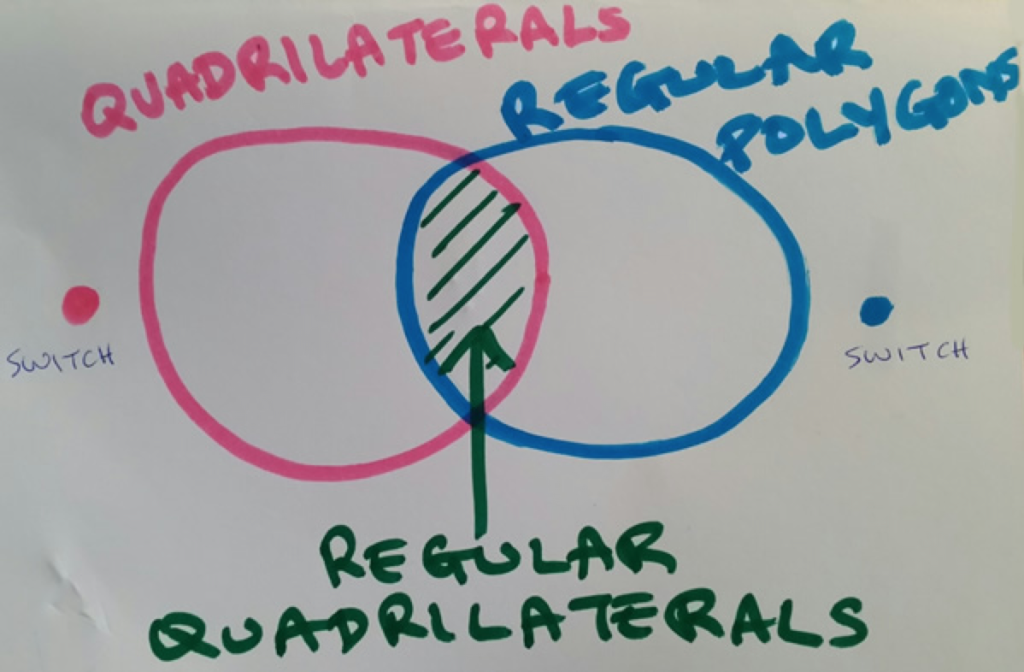 Then, inside the fold, we build this circuit, using: conductive tape, an LED, a 3V battery, and a clip to hold the battery in place. 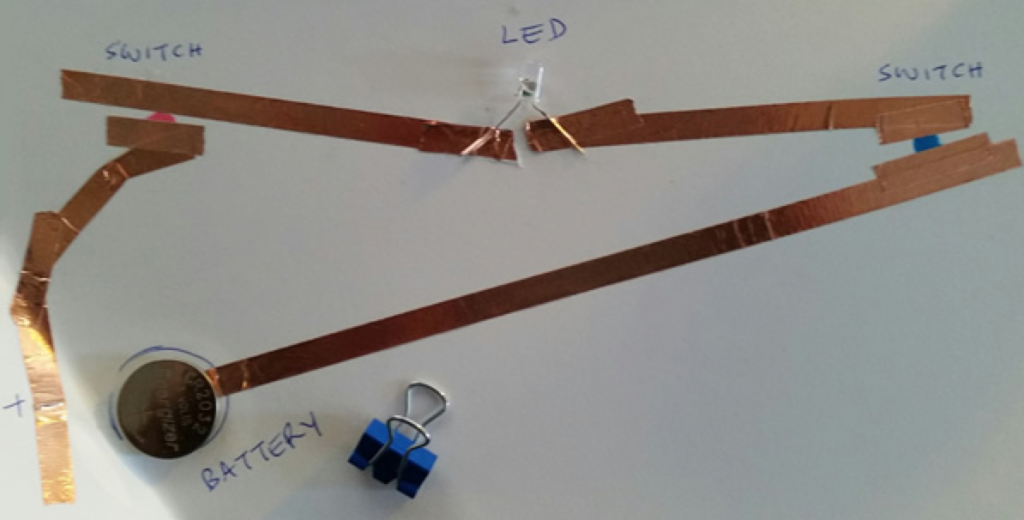 We also add 2 short strips to the underside of the drawing to close the switches when pressed from the other side. 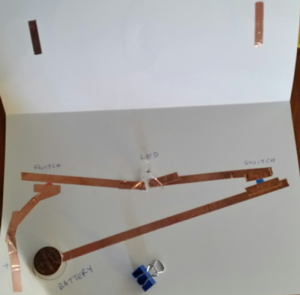 When you close the fold and press on the dots (switches), the LED lights up. 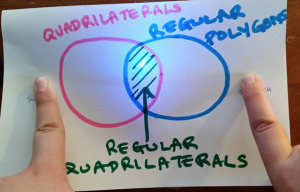 This circuit is called a SERIES circuit. Notice that all the components are in a single loop, so the current from the battery has only one path to follow.

Sets (like “all the quadrilaterals” or “all the regular polygons”) and their relationships are an important part of math.

Let’s look at sets A and B:

Here are 3 examples of relationships:

AND, OR and NOT are 3 examples of how we can create relationships between sets.

What would be the resulting sets in each of these relationships?

All of this is part of the branch of mathematics called Boolean Algebra.

In science you study electricity and circuits. The series circuit we looked at above is one example. Another example is a parallel circuit, which is shown below. 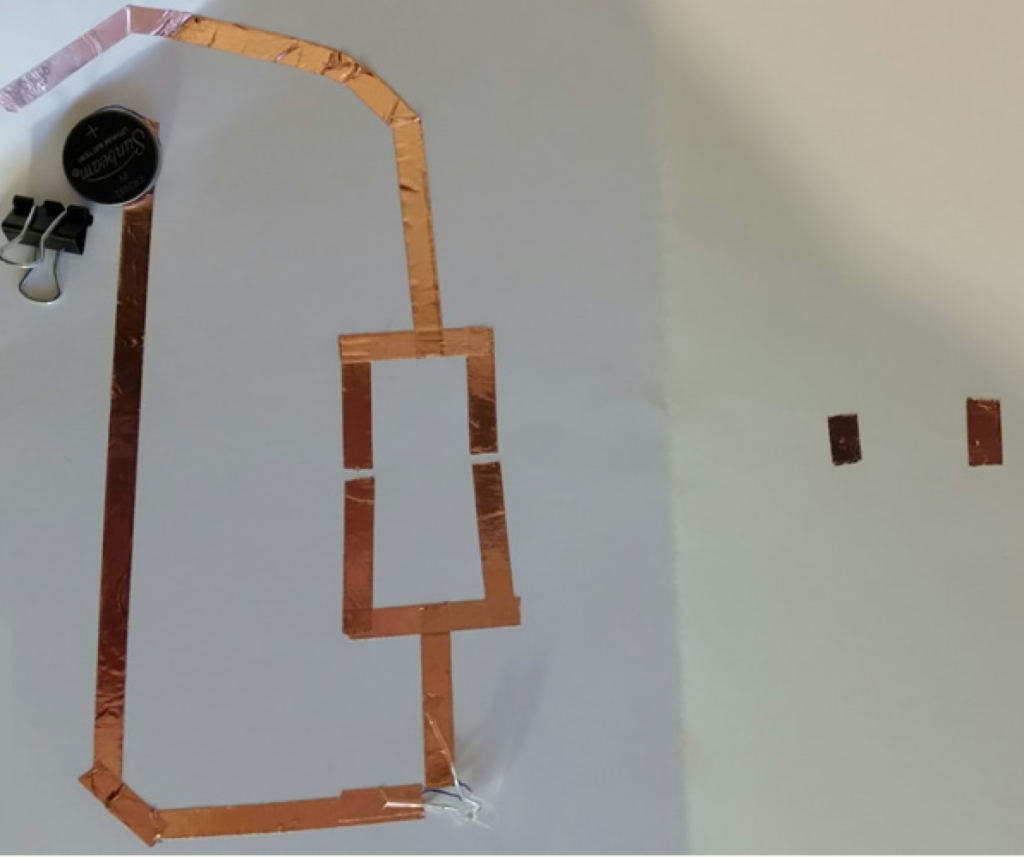 Notice that closing either switch will complete the circuit, and turn on the LED.

So, in the series circuit, both the first switch AND the second switch must be closed.

And, in the parallel circuit, either the first switch OR the second switch must be closed.

What makes smartphones smart? Smartphones are smart because they can make decisions.

Let’s consider the built-in alarm clock. Suppose you set it for 7 AM.

In order for the alarm to sound:

This decision is made using an AND logic gate, illustrated below. 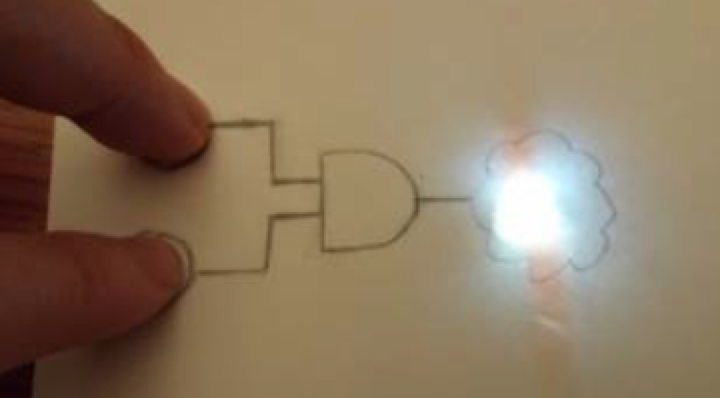 Here is Scratch program that decides if the number you enter is greater than 10 AND less than 20. 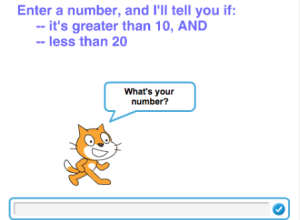 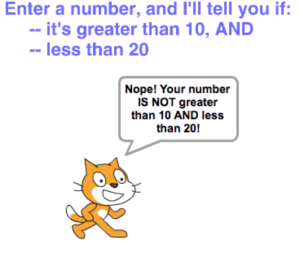 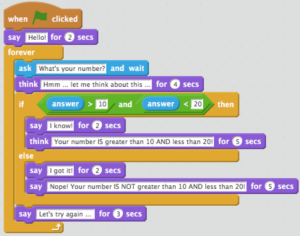 Information for this page was provided by Dr. George Gadanidis.

For more information please refer to George’s website at What will you do in Math today?